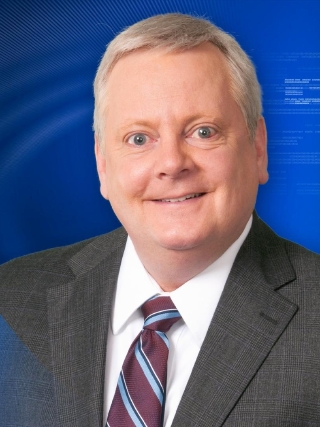 The Tri-Cities has been home for Dave for more than 25 years.

He has fond memories of growing up in the small farming community of Traer, Iowa. Baling hay and detasseling corn earned spending money for Dave in his youth. However, it wasn't what was sprouting from the soil that garnered his interest, but rather what was falling on it from the clouds.

His interest in weather began at an early age when the tornado siren sounded one summer evening, and his mother insisted that hunkering down in the basement was the appropriate plan of action. While his mom was absolutely correct, every bit of Dave's inner desire was to go outside and look for that tornado.

Dave earned his degree in meteorology from Iowa State University, and he also received a minor in mass communications. While in college, he presented the morning weather for WOI-TV in Ames/Des Moines, Iowa. Following college, he worked as an on-air meteorologist for KCCI-TV in Des Moines until he joined WCYB as Chief Meteorologist in 1987.

For more than two decades, Dave has been honing his skills on what he deems "a very challenging" part of the country to forecast the weather. While his forecasting confidence over the years has increased for the geographically diverse southern Appalachians, he says he is always learning something new about how weather systems affect the Tri-Cities.

What Dave loves most about the Tri-Cities region is the beauty of the mountains and the friendly folks who have made him feel at home. Dave enjoys the many people he meets while off-camera and at the many community events that he is involved.

He met Natalie, a WCYB employee at the time, in 1988, and they were married in 1992. They have two children...son Austin, and daughter Taylor.